Installation and licensing. BrainVoyager uses a software-based licensing system and will not run without a valid single computer or floating network license. In order to install BrainVoyager for evaluation or to update a licensed version to the latest release, please download the software using the following link:

If you do not have a license yet, you can use the free EDU version or ask for a time-limited trial license to evaluate BrainVoyager with your own data. A trial license unlocks most features of a full license lacking only optional components (no scripting and plugins). You need to accept the license agreement during installation.
In case you have an older version of BrainVoyager, close any running instance prior to installation. We highly recommend to deinstall any older version of BrainVoyager before running the installer. If the message "Do you want to allow the following program from an unknown publisher to make changes to this computer?" (or similar) appears during installation (User Account Control dialog), click "Yes", otherwise installation will not be performed.

To install the program, double click the downloaded installer executable (.exe file) and follow the instructions of the Installation Wizard. If you have already a valid software license, you can continue using BrainVoyager as before after installation and enjoy its new features. If you do not have a license, you will see a licensing screen after starting the software. To activate (unlock) a time-limited trial version, you need to send an email to “licensing [at] brainvoyager [dot] com” containing the displayed “Hardware-ID” and additional information for registration (name, institute/lab, mail address). Such an email is prepared automatically by clicking the “Prepare Email” button in the displayed "License Activation" dialog. Usually within a few days you will receive a license key and a license name/ID (e.g. TSKF307BC88-PETER-SUGAR). After entering this information in the licensing dialog, the software will be activated and it is ready to use for 30 days. More details about the licensing and activation process can be found on the page BrainVoyager Software Licensing.

In order to get the full version of BrainVoyager (after evaluating the EDU or trial version), please send an email to “sales [at] brainvoyager [dot] com” to purchase a license. The full version enables some features that are disabled in the trial version, including scripting and plugins. If you purchase the full version of BrainVoyager, you will get a key that unlocks all licensed features and the software can be used as long as requested in the purchased license. There is also a floating network license available allowing to use a licensed maximum number of computers concurrently from computers in a local (e.g. lab) network. For details send an email to licensing [at] brainvoyager [dot] com.
The installer will put the program folder “BrainVoyager” in the “C:\Program Files” directory (“C:\” is the usual example of the operating system drive, it might be different in your case). Scripts, C++ plugins and Python files will be installed in directory “Documents\BVExtenstions”.
System Requirements
Version 21.4 of BrainVoyager is fully compatible with Microsoft Windows 10 (recommended). The software should also work fine on Windows 7, and 8.1 but these versions are no longer extensively tested. Note that BrainVoyager is only provided as 64-bit software and thus requires a 64-bit Windows operating system.
Important: In case that BrainVoyager does not start after installation on Windows 7 and 8, you need to run the Microsoft Visual Studio 17 "vc_redist.x64.exe" file that is available in the BrainVoyager folder ("C:\Program Files\BrainVoyager\vc_redist.x64.exe") and it can be also downloaded here. If you still have problems to launch the program, you may also need to install an older Microsoft "vc_redist" file that you can download here.
Most functions of BrainVoyager run with modest working memory demands, but a minimum of 4 GB is required and 8+ GB recommended.
OpenGL / OpenCL. BrainVoyager is a graphics-intensive program requiring OpenGL 3.3 or higher for its operation as well as (optionally but highly recommended) OpenCL for acceleration of compute-intensive calculations. Make sure that the latest graphics drivers are installed, which should be the case if the operating system is regularly updated. In case you have multiple graphics cards, make sure that the better performing one is used for BrainVoyager. Some Windows laptops and desktop computer have, for example, a lower-performing integrated Intel graphics card, and a high-performance (discrete, stand-alone) graphics card from NVIDIA or AMD. While BrainVoyager runs fine with most recent integrated Intel graphics cards, it is advised to use the high-performance graphics card to run BrainVoyager in such constellations. To ensure this, a special tool from the graphics card provider need to be used to specify that BrainVoyager.exe should use the high-performance graphics card (e.g. via the NVIDIA Control Panel, which may be accessible directly when right-clicking the BrainVoyager.exe file). To check this, BrainVoyager reports which graphics card is chosen as well as which version of OpenGL is available in the program's "Log pane". In case the GUI is not starting for some reason, you can also consult the "bv_ogl.txt" file that BrainVoyager stores in the "Documents" directory of the current user.
Note. BrainVoyager supports OpenCL (GP-GPU) acceleration for several compute-intensive operations if supported by your computer system. To benefit from this, OpenCL acceleration must be turned on in the "Settings" dialog. For details how to test its performance and how to enable it, inspect topic "Exploiting the Power of GP-GPUs" in chapter "Additional Documentation" of the User's Guide.
Documentation
The User's Guide (available locally as well as online) provides basic and advanced information about BrainVoyager and can be easily invoked by clicking the "User's Guide" icon in the main toolbar or by clicking the "User's Guide" item (or "User’s Guide (Web)" item) in the "Help" menu. The BrainVoyager 21.4 User's Guide is also available as an e-book.
Several PDF files introducing various topics are also placed in the BrainVoyager folder after installation, including the Getting Started Guide that is highly recommended for beginners. If you are upgrading BrainVoyager, you may want to check out the "News" section of the User's Guide. We highly recommend to read the release notes (available from the "Help" menu) to learn about new features, enhancements and bug fixes. Release notes are available for the current as well as previous releases. Documentation is also available on this web page, including the E-book version of the user's guide. If you have any questions, suggestions or bug reports, please send an email to support [at] BrainVoyager [dot] com.
Sample Data
If you want to learn basic and advanced features of BrainVoyager (EDU), it may be useful to start with example data sets, which are also used in our BrainVoyager training courses. The installers available on this page for download do not contain sample data. To download example data sets, click the "Sample Data Web Page" item in the "Help" menu of BrainVoyager or visit the example data sets page with your Browser. The analysis of the "Faces, Houses in Visual Fields" dataset is described in detail in the BrainVoyager Getting Started Guide.

Python Support
Since version 20, BrainVoyager supports an embedded Python interpreter as a new programming environment for scripting and plugin development. As Windows 10 does not come with a pre-installed Python, it needs to be installed on your computer if you want to use Python in BrainVoyager. Version 21.x of BrainVoyager requires version 3.6 of Python that should be installed using the standard distribution of Python from the https://www.python.org web site (it is recommended to remove the old "WinPython" installation used for BrainVoyager 20.x). It is important that Python is installed for all users so that it is installed in the standard path "C:\Program Files\Python36", which BrainVoyager is expecting when deciding about enabling Python during start-up. The Python installer python-3.6.5-amd64.exe can be found on this page https://www.python.org/downloads/release/python-365/ (download the file with the name "Windows x86-64 executable installer") and it can also be directly downloaded from our web site. 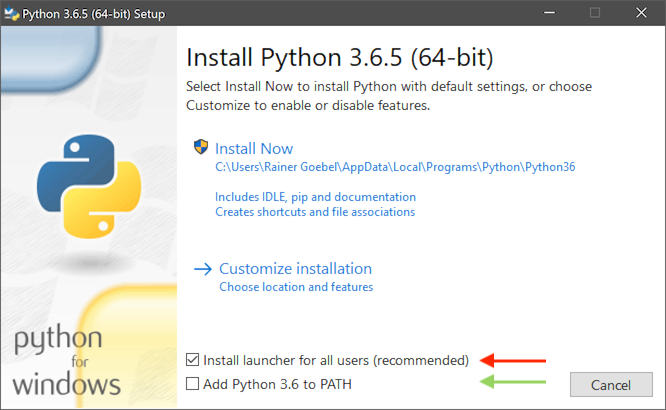 After starting the downloaded Python Installer, make sure that the option "Install launcher for all users" is checked on the first page (see red arrow). You may also check the "Add Python 3.6 to PATH" option (recommended, see green arrow) in case that you want to use the installed Python as your default version but this is not required (it makes, however, package installations easier, see below). Make sure that you do NOT install in your local user folder (as shown above in the "Install Now" field). To ensure this, click on "Customize installation" and then accept all default settings including the "Install for users" option, the "pip" option and the "C:\Program Files\Python36" installation path.
When starting BrainVoyager after Python 3.6 has been installed, the Python tools (console, developer IDE) will be enabled. If this does not work, please contact our support. Some provided example Python files require basic scientific computing and visualization packages such as numpy and scipy. These packages should be installed from a command prompt with Administrator privileges, otherwise the commands will fail. You can start a command prompt with Administrator rights by right-clicking the "Command Prompt" icon in the "Windows System" folder in the Start menu and selecting "Run as administrator" in the appearing context menu. Then you can install the most relevant packages:

The first line updates the Python package installer "pip" and the subsequent lines install the numpy, scipy and matplotlib packages. Note that the path to Python36 should be in the Windows PATH variable, which will be the case if the "add Python 3.6 to PATH" option has been selected in the Python installer. If not, you need to replace "python" with '"C:\Program Files\Python36\Python.exe"' (including the double quotes) in each line: Alternatively, you can also at this stage add the Python location to your system PATH in the Command Prompt using the "set" command:
To permanently add the two Python directories to PATH, use the "setx" command instead of the "set" command but note that the permanent PATH setting takes effect only when opening a new Command Prompt, i.e. the Python path will not be added to the current command window with the "setx" command.

After installing Python 3.6 as described above, BrainVoyager will enable Python automatically. When clicking the Python icon on the right side of the main toolbar, BrainVoyager presents a (docked or floating) interactive python console and a python development window that can be used to load, edit and save Python files. To learn how to use Python in BrainVoyager to script processing routines or to add new functionality, consult the Python Developer Guide that is available from the "Help" menu. You will also find several example Python files in the “Documents\BVExtensions\PythonScripts” and ”Documents\BVExtensions\PythonPlugins" folders that are accessible from the "Files" panel on the left side of the Python development window.
Matlab / COM Support
BrainVoyager can be scripted from Matlab, for details see the "ScriptingBrainVoyagerFromMatlab_BV21.pdf" file that will be available in the "GettingStartedGuides" directory inside the "C:\Program Files\BrainVoyager" folder after installation. To access BrainVoyager from Matlab (or other COM-based access such as the Windows Scripting Host), BrainVoyager must be registered as a COM server in the operating system. This can be done by running BrainVoyager from a command shell window with the parameter "-regserver". To simplify setup, the command shell file "RegisterAsCOMServer.cmd" is installed in the BrainVoyager folder that can be run by double clicking. It is, however, recommended to run this command with administrative rights, i.e. by right-clicking the file and then selecting "Run as administrator"in the context menu. After registering BrainVoyager as a COM server once, BrainVoyager can be used from Matlab as described in the Matlab scripting guide.
Back To Top